One of the traits for this month from our Intentional Parenting list is “initiative.”   Great trait, but how do you teach that?

First of all, initiative means being the one to take the first step or action; starting something without being told to do so; being the one to see what needs to be done, then starting so others may follow. This is not the same as being a natural helper.  It goes farther than that.

You remember the old saying, “Some people make things happen, some people watch things happen, and some people wonder what happened.”  People who take initiative are “self-starters,” a trait valued in business and the work force.  They have self-discipline and are motivated internally.  Again, some of these traits are built into people naturally through their personality type, but there are ways to train it in as well.

Is Initiative in the Bible?

One of my favorite stories in the Old Testament is the story of Jonathan and his armor-bearer in 1 Samuel 14.  The land is at war, and Jonathan says, let’s go confront the enemy.  No one knows they are doing it.  Jonathan comes up with a plan, and the armor-bearer says, let’s go – I am right behind you!  (If you research the location, it was crazy-difficult!  Check out this picture!)  They kill about 20 people in a half-acre space, then God sends terror on the enemy and they all turn and flee.  Jonathan’s initiative and God’s response turns the tide in an ugly situation.  Israel wins a miraculous, God-given victory, but it starts with Jonathan’s initiative. 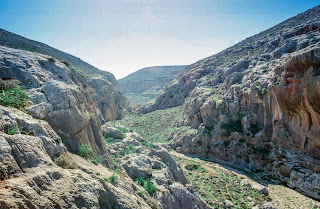 Of course, in the New Testament we see God’s initiative in reaching out to love us before we knew him when he sent Jesus to die for us. (Ro. 5:8) This, by the way, is the pattern for courtship and marriage:  young men should initiate dating / courtship and girls can choose whether the young man is the match and has the qualifications they want.  Girls should not do the pursuing.

This past fall, we celebrated the 500th anniversary of Martin Luther’s posting the 95 Theses on the door of Wittenberg church.  What initiative!  His bravery and speaking out changed the known world and the church forever.

Consider how things get done in your home.  How much of it requires you to tell others what needs to be done?  Are you telling the kids everything to do?  Do you remind (or nag) them about their chores?  About hygiene tasks?  Isn’t that wearing?  Does that set them up for success as adults?  Go beyond developing habits, to teaching kids to think and choose well in life.  Once trained, they need to take initiative with daily tasks.

For little ones, we had helping hand jobs, with pictures posted on a hand drawing (wash face, brush teeth, make bed, pick up toys, pick up clothes).  I could just say, are your helping hand jobs done?  For older kids we had chore charts which rotated each week.  (They had already learned “helping hand jobs.”)  But rather than ask when they were done, we set up rewards with a point system.  For example, if their chores were done before 9 AM when we were going to start homeschooling, they got a point.  And there were consequences if your chores did not get done.  For example, when the new week came and the person who had inherited backyard pooper scooper chore found that the person had not done it well the week before, the violator would find themselves doing the chore for another week. (More practice needed apparently!)  Of course I inspected things at the end of each week. (Children don’t do what you expect, but what you inspect.)

With homeschooling, I set their schoolwork up for the week on a chart.  Items they needed to do with me were highlighted in yellow.  They were to ask for my help after I was done with reading class for the younger kids, my first task.  Things could be X-ed off the chart as they were completed.  If they got done by 2 PM, they got points.  If they were done by noon Friday with the whole week’s work (and, of course, I checked it!) they got extra points.  If they were done by the end of the day Thursday, all 5 days’ work counted as such, but they got a day off to play or do what they wanted to.  On the downside, if they dawdled, I was not available to help them with schoolwork after 3 PM.  I had other things I needed to do.  That math or spelling test would have to wait until the next day.  They could drag out their schoolwork until 5 or 6 PM if they wanted to, but they would be the one who suffered.  It didn’t take long to learn to manage their workflow and have time for reading, jumping on the trampoline, or playing Legos.

At the end of the week, they could use their points to buy items from a treasure chest.  It contained goodies from the dollar store, candy, and certificates for picking out a movie, going on an extra date with Dad (ice cream or McDonald’s) or have a friend over.  Warning: be sure to figure out how many points your kids can earn in a week and decide how much you can afford for those points to be worth.  When I first started this, I created points for so many things, we could not have kept up with the cost of the rewards.  I had to scale back on what we gave points for and how many points it took to get things from the treasure chest.  And our kids learned to save up their points and use them judiciously.

Another by-product you will have to explain to your children is that results and rewards are not equal.  The person who take initiative earns more.  Not everything has a material reward, but in life those with initiative have a leg up.  You can provide equal opportunities, but not guarantee equal results.  THAT is a real-life lesson!

Be sure to notice when kids initiate good actions or events.  If one chooses to help an elderly person, compliment the child in front of the rest of the family later.  If she helps clean up after an event at church, thank her especially if they just noticed the need and dove in without being asked.

You might want to have an extra chore/job or two in the back of your mind in case a child asks you if there is anything they can help with.  If a child jumps in and helps with something you are doing, be sure to say, “Thank you for noticing I needed some help.”

Point out when someone else is taking initiative and explain it to your kids.  Talk about noticing people’s needs and about thinking ahead about what needs to be done.  Talk about how ministries and nonprofit organizations get started through the heart and vision of a leader.  You might even want to plan a “Family Initiative” project.  Get together as a family to brainstorm about something you could do together to help someone or to raise money for a worthy cause.  Talk to kids about needs you notice around you.

One of the things I love about the Boy Scouts is their many opportunities to learn while earning merit badges.  Young scouts get to choose a topic to work on.  Sometimes the troop will offer classes or opportunities to earn a badge.

Take a look at the life skills list in Chapter 17 of Intentional Parenting: A Guide for Christian Families.  Let your teens pick a skill to work on.  Discuss it with them and help them develop a plan to learn that skill.  It might mean they need to contact a family friend to see if they can shadow them at work.  Or you might have to schedule extra time to help them learn to use the city bus system.  Letting them choose and move forward prepares them for real life in the real world.  And it’s safer to be learning that while you are handy to help if needed.

Letting kids take initiative to earn money to buy something they want is a great lesson.  I remember my sisters making and selling peanut brittle to go to youth camp.  They became known for it and it became an income stream for them until they were old enough to get regular jobs.  Recently, a young man who was about 12 knocked on my front door.  He had a lawn mower and perceived that my lawn needed attention.  He would charge me $40 to do the front and the back.  Was I interested?  I was a little bowled-over, actually.  Such a rare thing to see such brave action by one so young.  My husband was out-of-town, so how could I say no?!  I asked him what he was earning money for and he explained that he wanted a particular video game.  Hooray for parents who gave him opportunity to learn a life lesson, rather than just granting the wish.

Sometimes we think we are doing the right thing by telling our kids what to do.  Take it to the next level by creating ways for them to learn initiative.  Blessings to you as you teach your children this valuable character trait!

Posted by Linda Stahnke at 8:57 AM